Jack In The Box Vegan Options. Like many other popular chains such as Wendys and McDonalds, Jack in the box is another huge fast food restaurant that originated from. the United States. It has been serving people with excellent food and delicious treats for several years now.

This fast-food chain is popular for many items such as fried chicken, fries, nuggets, burgers, and much more! The article below gives a full analysis and description of what Jack in the box offers to people who are vegan.

It gives people options about what they can order off the menu without harming the animals. Since this restaurant is basically a fast-food chain, it doesn’t have a wide menu for the vegans, but it does offer some items for them to enjoy!

List of Vegan Options at Jack In The Box

The list below explains a variety of animal-free food items that Jack in the box offers to its customers. This can come in handy when you don’t have a lot of dine-in vegan options in your neighborhood or in case you are traveling and want to be all aware of the vegan options you would have.

This dish offered by Jack is a bowl served with white rice, vegetables, and chicken teriyaki. Though this item is not originally vegan it can be done so by requesting the restaurant. One can ask the waiter to not add the chicken and instead serve with a lot more fresh vegetables.

So the teriyaki bowl becomes a perfect substitute for the vegans with rice, veggies as well as teriyaki sauce (that is also animal-free).

Salads at most restaurants are a great vegan option. At Jack in the box, the side salad consists of fresh lettuce, grape tomatoes, iceberg, carrots as well as thinly sliced cucumbers. Served in a bowl along with ranch dressing, the salad makes up a great option for the vegans.

The salad at Jacks also has croutons (that contain milk). Low-fat balsamic vinaigrette can be a perfect substitute for these croutons. You can always ask the restaurant for any other vegan dressings, it’s possible and you might just get lucky!

French fries have been a core item on the menus of all the fast-food restaurants in the world. You can never go to a restaurant and not have them serve you french fries. Since french fries are made from potatoes fried in oil, this yummy dish counts for a perfect vegan option for anybody looking for one.

These are potatoes that are curly in shape and later are seasoned with spices to give a tempting taste. These seasoned fries are made from potatoes, vegetable oil, salt, spices, onion powder, and cornstarch.

You must already be aware of what potato wedges are. They have been a great appetizer for decades now. It’s exciting how Jack in the Box offers these wedges and one who lives a vegan life can opt for these when having lunch with friends and family.

Another potato dish that Jack in the house cooks is hash brown. They are golden-brown patties that are deep-fried and look like a kebab. Unlike many restaurants, hash brown is not loosely shredded but instead, they are round and flat.

As the name suggests, in simple words it is corn on the cob. The different part is that it is seasoned with several spices when served at Jack In the box. Corns add up to a perfect vegan option list and additionally they are very fulfilling!

Apple Sauce pouch is another side dish at the popular fast-food restaurant. It is often found at restaurants on the kid’s menu but it’s a good alternative for anyone looking for vegan food.

Jack in the box offers a great deal of different kinds of dips and sauces. The unique and intriguing taste of these dips adds extra flavor to the meals. And one great deal about these sauces is that they are all vegan friendly!

Here is a list of all sauces you can get from Jack in the box to spice up your meal without having to compromise the lifestyle of you and your family.

All these sauces and dips mentioned above can be opted by anyone who lives a vegan life and you could get these without having any second thoughts.

Jack in the box also has these three sweet syrups that you can ask for from the restaurant in order to pour over your decadent desserts.

Some very popular questions asked by the Jack in the box loyal customers have been listed below. 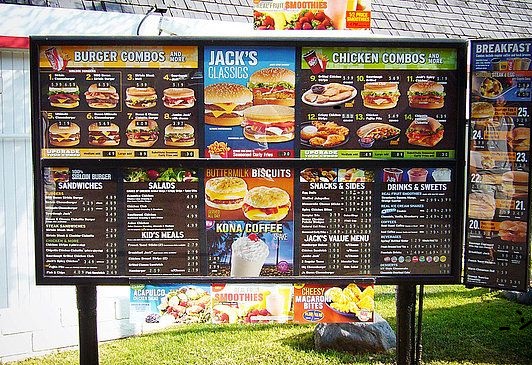 Are Jack In The Box Tacos Vegan?

Originally the tacos that Jack in the box serves are not vegan. They contain both beef and chicken. So a vegetarian might not be able to order it. Although what you can do instead is ask the restaurant to serve you the taco shell filled with a lot of vegetables.

The taco shells are vegan and ingredients like beans, rice, salsa and french fries can all be added in the shell to make an appetizing vegan meal for you to enjoy. Moreover, the taco also contains dressing from soy which is vegetable protein that adds to the flavour.

Are Jack In The Box Egg Rolls Vegan?

As the name suggests egg rolls have eggs in them. This makes them a non-vegan food item. Additionally, they often contain anchovies (that is a type of fish) and pork. So egg rolls are definitely not a vegan option at Jack in the box.

Does Jack In The Box Serves Veg Burgers?

Up until June 2020, Jack in the box doesn’t offer any veg burgers on their menu. All their burgers contain real meat which makes them non-vegan. Although we can’t say anything about the future.

Are Jack In The Box Onion Rings Vegan?

When you think about onion rings you would wonder if they are thinly sliced onions that are deep fried in the oil. However, at Jack’s the onion rings that are served contain dried whey which is a form of dairy. Thus, onion rings are not a vegan option.

Are Jack In The Box Burgers Real Meat?

Yes! The burgers served at Jack in the box are real meat and therefore, are not vegan. This has been checked against the ingredient list given on the restaurant’s website.

Are Jack In The Box Churros Vegan?

Churros are sweet bread-like treats. They are coated with sugar crystals and chocolate syrups. Churros don’t makeup to the vegan option list as the mixture used to make them contain milk and eggs. Thus, the dairy prevents it from being enjoyed by the vegetarians.

Through mix and match, you can order a delicious and fulfilling vegan meal at Jack in the box. Ranging from complete meals to tiny snacks, the fast food restaurant can offer you all.

Although it mainly serves a lot of non-vegan food items, one can always find a thing or two to balance the lifestyle they are living! You may not have an entire vegan item page on the menu nut you can always get things cut off from the meals offered to get your desired food.

For instance, you can ask the restaurant to serve you teriyaki bowl with no chicken, or burger burns with only vegetables and sauces. When examined closely you can always find one thing or other to consume.

Definition Question: What Is Vegan?