Five guys is yet another very popular fast-food chain originated from the United States. There are 1500 outlets of Five Guys spread across the map. This casual restaurant mainly focuses on fast food such as hot dogs, burgers, and french fries.

In addition to that, the restaurant also has an ‘Allergen Guide’ posted on its website. This guide consists of the list of all the ingredients used by Five Guys that could either be allergic or not so animal-friendly. So you could check the list before going to the restaurant to see what it has to offer and if it’s suitable for you or not.

The article below carefully analyses and gives you the perfect, collected information about what you could order at Five Guys while living a vegetarian lifestyle.

Do Five Guys Have A Vegan Menu?

Considering the fact that Five Guys is a fast food restaurant it is very least likely that they have a complete section of the menu devoted to the vegans. But the restaurant does realize the significance of these people and work towards serving them properly. You can talk to the restaurant manager and request a vegan meal or you can ask for recommendations that fit your lifestyle.

Although Fives Guys is originally a fast food restaurant so you cannot expect many vegan dishes on the menu. Below is a list of some food items a vegetarian could order when going to the restaurant for a fine dine-in with friends and family. 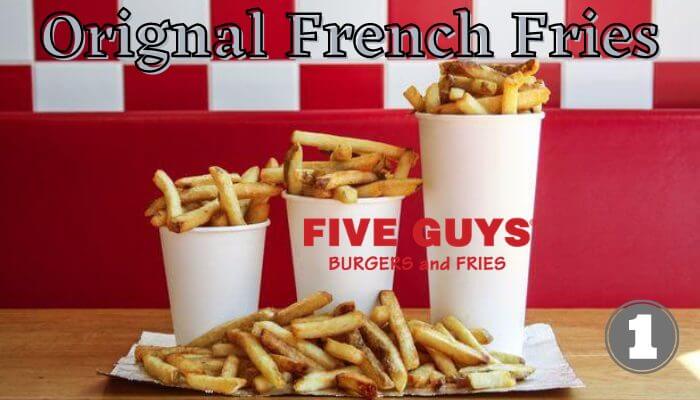 The Five Guys menu has a wide range of potatoes and the most common type is French Fries. These are freshly cut and sliced potatoes that are fried in vegan oil such as the olive oil or peanut oil.

Since potatoes are the only ingredient for this dish, it makes it a perfect choice for all the vegetarians out there to opt for. At Five Guys the fries are made in two other special ways as well that are their speciality.

They are called Five Guys style fries and cajun fries. Details regarding these French Fries have been listed below. 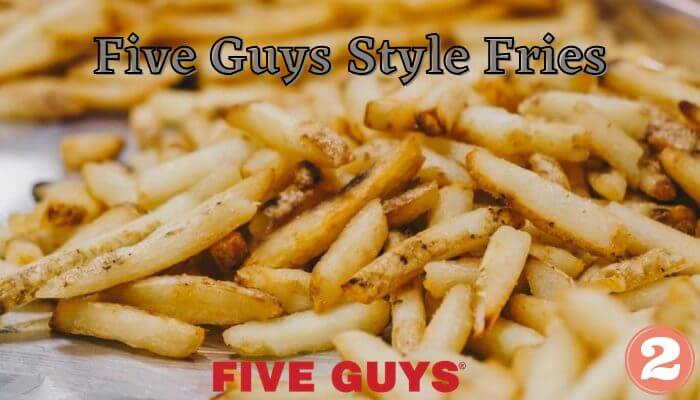 This is a signature dish of Five Guys, it has been enveloped on the menu for years. They are fries tossed in salt and a special spice mixture made by the professional chefs of the restaurant.

This brings out the taste of these fried potatoes even better than a tempting and mouthwatering taste that would make you order them again and again. Again since the dish has nothing but potatoes and a few species it marks up to be a perfect vegan dish to order. 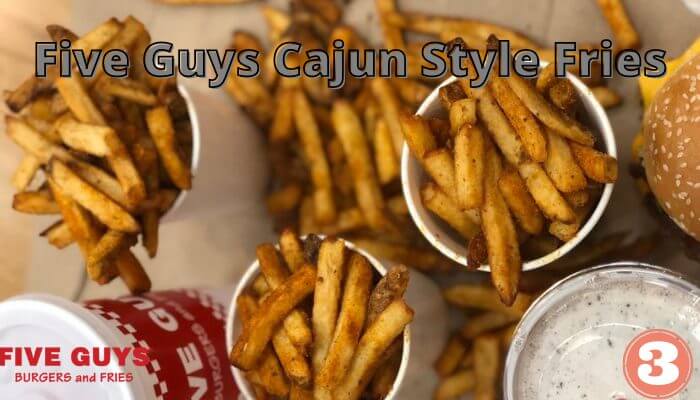 These are other special fries made at Five Guys. The cajun fries are sprinkled and tossed with a special and secret spice mixture. Although some ingredients used in Cajun fries were guessed as there were as follows: Onion powder, salt, paprika powder, oregano, garlic powder, white pepper, red pepper and more.

If you and your friends are in the mood to try something exciting and flavorful, then you must order these cajun fries. They are not only delicious and unique but also animal-friendly. Moreover, the potatoes are fried in vegetable oil such as olive or peanut and not the oils that contain animal substances.

Thus, if you are a vegetarian you could definitely order them when you visit the restaurant next time. 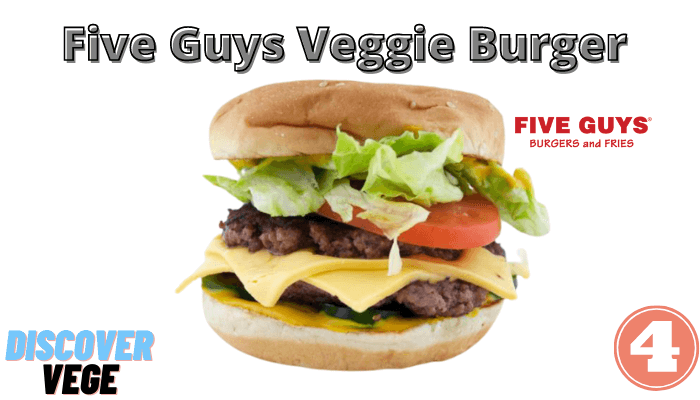 Yes. You read it right! The signature sandwich of Fives Guys is now vegan-friendly. The restaurant offers a veggie sandwich that is a sandwich with a lot of sauces and vegetables – as the name suggests. Unfortunately, the veggie sandwich is served in buns and those buns contain milk which makes this dish not so animal-friendly.

However, you can be smart about it. You can ask the restaurant to serve you the sandwich in a lettuce wrap instead of a bun. This would give you a complete meal to enjoy without having to compromise your lifestyle.

Many other ingredients that are added in this sandwich are grilled onion rings, green peppers, thinly sliced tomatoes, mushrooms and fresh lettuce. You can spice it up with any sauce and a vegan beverage to enjoy a full course meal. 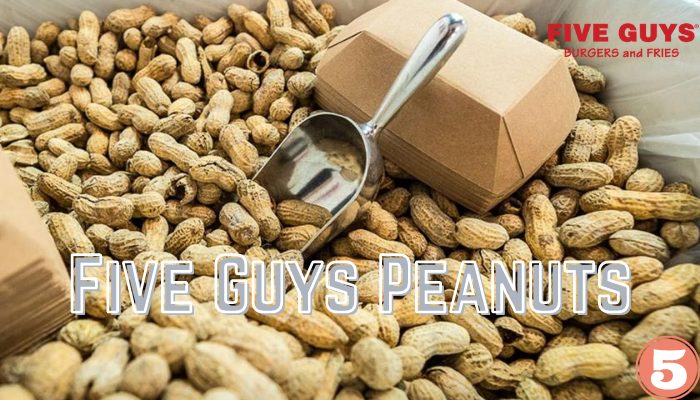 Although this is more of a snack than a dish, peanuts are a core part of Five Guys and you can order them off to enjoy it as a snack while waiting for your meal. Or even when you are just sitting with your friends and family, chitchatting.

The interesting part is that these peanuts are free of cost and the restaurant serves them to paying customers. Since it is a peanut itself and it’s a dry fruit, they are also vegan friendly. 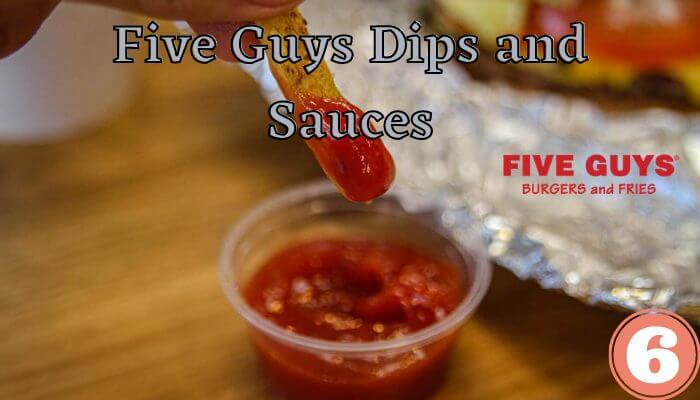 Five Guys offers its customers some sauces and dips that can be paired with any main dish, especially with the fries. The most incredible part of these sauces is that they are all vegan-friendly and animal-free. A few have been listed below. You can also ask the restaurant manager for more, and you might get lucky. 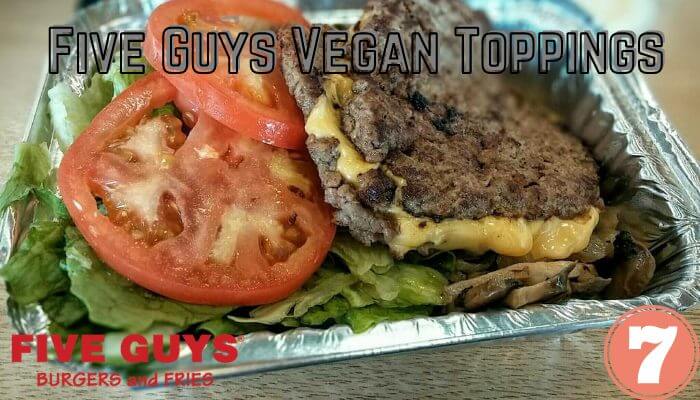 Five guys offer a range of toppings to its customers. They can choose to add them in anything, whether it be burgers, salads or fries. One can choose from the list below and add extra flavour to their dishes.

However, one thing to keep in mind is that there is a possibility these toppings are sauteed and cooked in the same utensils as the beef and chicken. So you might want to ask the chef about it first before placing the order. 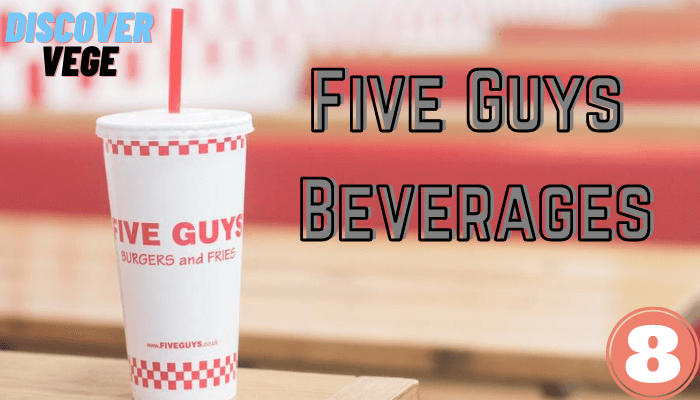 The popular restaurant offers two different types of sandwiches on their menu. One is the Veggies sandwich and the other one is the cheese veggie sandwich.

Now as the name suggests, the cheese sandwich contains cheese that is obviously dairy, thus making it a non-vegan item. On the contrary, the veggies sandwich is finely combined fresh vegetables, drizzled with sauces and olive oil.

Although this sandwich is served in buns that contain milk, you can request the staff to serve them in lettuce wraps – making a perfect vegan dish for you!

Does Five Guys Have The Impossible Burger?

It would have been very spectacular if the restaurant offered any vegan burgers. However, they don’t! And the impossible burger and the beyond burger at the restaurant are made from animals and do not cater to vegetarians.

Things to Do Before Ordering at Five Guys?

So to begin with, the American restaurant Five Guys does not have a very extensive menu when it comes to vegan-friendly food. Though it does have quite a few options on the menu since it is not basically a vegan restaurant – you do not get to order a buffet! A few things to keep in mind when you go to the restaurant is that you should converse with the managers first.

This helps in such a way that you raise awareness in the society amongst restaurants that there are vegans out there who prefer to have their wishes fulfilled. Second, you also get to know more about the restaurant and all the things they could offer you considering the vegan lifestyle that you are living in.

You would get a heads up over what dishes are vegan and non-vegan and how seriously the restaurant is about the vegetarians. Another thing you could do is to check the restaurant’s social media handles and tags related to the vegan options served.

This would help you figure out what vegetarians have formerly ordered at Five Guys and also give you some insight reviews.

Through mix and match, you can order a scrumptious and delicious vegan meal at Five Guys. Ranging from main course dishes and snacks to beverages and sauces. The restaurant has it all! Although most of the food served is non-vegan, you can balance off your order by moving things here and there a bit.

It may not be the most ideal place for a vegetarian but at least they offer a few and would most definitely cater to you as best as they can. When pondered upon carefully you can always get the perfect meal for you and your family to enjoy at the amazing restaurant – FIVE GUYS!