Are Swedish Fish Gluten-Free and Vegan? As the name suggests, you might think it’s a kind of fish found in the lakes of Sweden. Half of this is true! Though the Swedish fish originated in Sweden, it’s actually not a fish. It’s candy! A chewy and gummy candy, shaped like a fish, was developed by Malaco (a Sweden candy producer) in the late 1950s.

This candy instantly became popular in the states. Originally developed in the beautiful red colour, now this candy has several variations and flavours – ranging from lemon-line to orange and more.

What Flavor has Swedish Fish?

You define the flavour of anything with its colour. Since the Swedish fish are red in colour, it is a common assumption that they are likely to taste like raspberry, cherry, or strawberry. It is a common belief amongst it’s consumers that the fish taste like these three.

Some people also claim that candy tastes like a combination of these three fruits and more. Yet no one has been able to pin down and identify the actual flavour since it’s so unique and fascinating.

All these years there has been no comment from the producers of the Swedish Fish either. A very popular theory has been evolving since the 1950s is that the origin of its flavour is the replica of lingonberry (a native berry to Scandinavia).

The other flavours of the candy represent different foods and are all unique in their ken way. So if you wish to taste the lingonberry or if you are curious to know what Swedish fish taste like, you should definitely try it once!

Yes and No! Whether the Swedish fish are vegan or not, depends on the packaging. The candy that comes in a peg bag, which is a hole punched on top of the packet, contains beeswax and palm kernel oil.

This candy is non-vegan and you would usually find it at the general or convenience store. However, another packaging, without the hole is where the candies are vegan. They do not contain any controversial ingredients and have thus been approved to be vegan friendly. So most of the time the Swedish Fish are vegan but do check the packaging to make sure.

Swedish is 100% gluten-free. No gelatin is used in the making of these candies. Instead, the producers of the candy use corn syrup and other agents to give the candy a gummy and chewy texture. You can buy it from the store without having to worry about the Swedish fish containing gelatin.

Swedish Fish Do Not Contain Gelatin Or Egg Albumen

The two top animal-derived ingredients stated by PETA are gelatin and egg albumen which have always been off-limits to vegetarians. The famous Swedish fish doesn’t contain either of them.

Since gelatin is used to give the candy the gummy texture that it has, Swedish fish producers use corn syrup as an alternative. This helps fulfill the goal of making the candy chewy and gummy. Companies also use certain techniques and conventional methods to avoid the use of gelatin while giving the best to their customers.

A plant that is found on the lands of Brazil and is very native to it. This is completely vegan and is used in all the Swedish Fish candies. However, it has been observed that there is one packaging by the company that does contain beeswax.

As a sign, the package has a hole punched on the top of the bag. This Swedish Fish contains beeswax and is obviously not vegan friendly. Since it is harmful to the bees it was not approved by vegetarians. So you should check the ingredients first.

This makes the candies non-vegan and thus a very unsuitable option for the vegetarians. A very suitable and similar substitute to Red 4 is Red 40.

It is vegan because it is derived from strawberries and can also be acquired from petroleum. So basically, Red 40 is used in Swedish fish making it 100% animal-free and vegan-friendly!

The food colours Yellow 5 and Yellow 6 are very similar to Red 40. They are also derived from petroleum which makes them animal-friendly. Yellow 5 gives a lemon colour look while the Yellow 6 looks a lot like a sunset.

They were formerly obtained from coal tar but modern production has shifted to petroleum. Moreover, the Blue 1 is a very synthetic food colour that is not only used in foods, but also in supplements, dietary, medicine and cosmetics.

It is derived chemically thus no animals are harmed in the production. Therefore, it is 100% vegan and animal-friendly.

When it comes to the assorted Swedish fish, both of the packages (peg bag and regular) are vegan friendly. They do not contain any beeswax or palm oil kernel, thus you can buy them from any grocery store nearby without giving it a second thought. 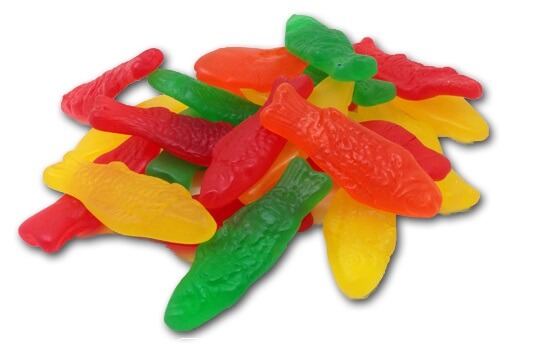 Although the Swedish fish is available in almost every grocery store and convenience store. But in case you want to be extra careful about hygiene and purity, you can always make the candy on your home, by yourself. This would give you the satisfaction and surety you need, plus creating a fun and exciting way of spending time with friends and family.

Since you are making it on your own, you can be creative with it. Such as creating different shapes, adding more colours. You could even mix and match two colours and create a very unique looking Swedish fish candy for your loved ones.

One thing to note is that the recipe above contains gelatin, which is a very main controversial ingredient that vegans avoid.

Considering the fact that this is candy-like any other sweets available in the market. The core ingredients are usually the same, however, there are a few additions that give this candy its own distinctive flavour. The list below shows the ingredients that are added in the vegan Swedish fish. So you might want to check the back of the packet before adding it to your cart. The following have been listed below:

So if the following is the list you see at the back of your candy packet, then you will know that the Swedish fish is not vegan and thus it would prevent you from wasting your money. So always check the ingredients!

Although most of the ingredients are the same, the difference formed is due to the beeswax and the palm oil. The beeswax is generated from the beehive which leads to the suffering of an entire bee population. While the palm kernel oil is itself vegan but it is a common belief that the extraction of this oil exploits the habitat and lifestyle of several animals which leads to them suffering. This is why both of these ingredients are not accepted by the vegetarians.

Controversial ingredients are those items that are vegan but there is a tiny doubt about them. The list below would help you analyse better and take informed decisions.

Sugar is the core ingredient when we talk about sweets and candies. It has always been a controversial ingredient in the vegan community for years. This is because the sugar obtained from crushing sugar canes is not in white colour. It is mixed bone char to give it the clean, white colour that it has. Though sugar originally is vegan the latter processing method makes it non-vegan. You can look into the sugar thoroughly if it is a major concern for you.

Palm oil is 100% vegan friendly. The only part controversial is that the extraction of oil and fat is very harmful to the animal environment. It is not safe for animals and thus causes them pain which is something vegans are against.

Artificial and natural flavours can be obtained either from plants or from animals. Usually, the flavours used in candies are derived from plants and additionally, if any animal-related items are used, they would be highlighted.

Food colours are often tested on animals before being introduced to the community. This is something against vegetarian ethics. It has been assured that Swedish fish production does not harm any animals and doesn’t use any colours derived from insects.

The table behind the Swedish Fish candy packet shows its nutritional content. It would help you keep track of your calorie intake as well as about the other important nutritions. The list below shows the nutritional facts about 10 pieces of Swedish fish candy.

To conclude, Swedish fish are delicious and sweet candies that have a very unique and appetizing flavour. All flavours of this candy are vegan except for one that has been mentioned above. You should definitely try it once or you could make it yourself too.