Everybody loves sweets and craves sweets! Being a vegan doesn’t mean that you give up on the pleasures of life and are expected to eat only greens.

You can enjoy the tasty treats as well, unlike any other person. There are sweets and candies in the market that are vegan, so that you could indulge your cravings guilt-free.

Unlike several other food specialties, there is a good amount of vegan and plant-based candies available in the candy aisle of your nearest grocery store. Some of the very popular candies that are ‘accidentally vegan’ include AirHeads, Cocomels, Dums, Hubba Bubba, Jolly Rancher and many more.

You can choose your favourite candy as per your likings. One of the very famous vegan candies is Candy Corn!

If living in the States, you must have eaten Candy Corn at least once in your life. Or more so, seen it in the store while running the errands. When it comes to Halloween, Candy Corn remains the very popular sweet treat among kids as well adults.

This classic, kernel-shape like treat doesn’t taste anything like corn – as the name suggests. Instead it is made to have a very delightful taste of warm vanilla, rich marshmallows and creamy fondant. The texture of this vegan candy is so smooth, it’s like biting into a piece of soft butter!

When you hear candy corn, a three color layered candy pops in your head. Yellow base, followed by an orange layer and topped with a white dump. However, this vegan candy comes in a variety of other flavours and candy corn colors, depending on the holiday season:

How To Make Vegan Candy Corn?

In order to enjoy this tasty delight, you can either buy it from a nearby candy shop or even make it on your own as a fun day with your friends and family. Listed below is an appetizing and very easy vegan candy corn flavors that would be quick and fun to make from scratch.

Making these candies on your own would mean that you can get creative with colors and shapes as per your likings. You could use the blue food color for an arctic and ocean theme, green color for a forestry look or maybe keep it just white for a more elegant look. Not only this recipe would be a classic, vegan alternative for candies but also a fun holiday activity in your homes. 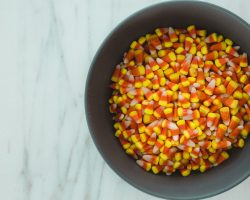 This classic, kernel-shape like treat doesn't taste anything like corn – as the name suggests. Instead it is made to have a very delightful taste of warm vanilla, rich marshmallows and creamy fondant. The texture of this vegan candy is so smooth, it's like biting into a piece of soft butter!
Print Recipe Pin Recipe
Prep Time 30 mins
Total Time 1 d 30 mins
Course Dessert
Servings 8 People
Calories 140 kcal 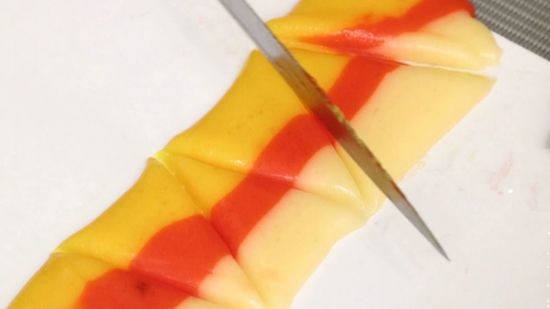 Your candy corn on the cob is ready to serve and now you have the perfect candy corn Recipe to make whenever you wish and to share with your friends and family.

The candy corn you make using this recipe wouldn’t taste like the ones found in the stores. They would be less hard and have a more rounded flavour, instead of being plain sweet. These candies are said to be far more creamier and softer.

What To Look For When Purchasing Vegan Candies?

When out in the market and looking for vegan candies, a couple of very important ingredients to check are carmine, gelatin and shellac. Carmine is a red pigment that is made from crushing the female insect cochineal. Gelatin is the core ingredient which gives the candy it’s chewy texture. It is obtained from boiling the tendons and skins of pigs and cows.

Moreover, shellac is obtained from the resinous excretions of specific insects. Shellac is used to give that glossy coating to the candy. These three ingredients are the very common things used in non-vegan candies, so you might want to look out at the label before making a purchase.

VITAMINS – Everything You Need to Know About Them