It’s a dessert that’s sure to melt away your worries! But here’s the tricky part: getting the frozen dessert into the oven or grill without it melting. We’ve all been there, trying all sorts of tricks, like putting ice cream on the stove and then turning on the oven or putting it in the fridge for an hour before cooking…just to no avail.

But don’t worry! We’ve got the perfect solution for you: Baked Alaska. This technique is the perfect way to ensure that your ice cream doesn’t melt when it goes into the oven or grill. So whip up a delicious Baked Alaska and enjoy this centuries-old dessert like never before! 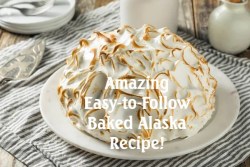 Make your dessert dreams come true with our easy-to-follow Baked Alaska recipe! Our Baked Alaska recipe with homemade ice cream is the perfect dish for you! Not only is it a centuries-old dessert, but it's also an omelette surprise, as a core of ice cream is hidden under a flambéed meringue topping.
Print Recipe Pin Recipe
Prep Time 1 hr
Cook Time 5 hrs
Total Time 6 hrs
Course Dessert
Cuisine American
Servings 8 servings
Calories 859 kcal

For the ice cream:

For the brownie base:

Baked Alaska differs from ordinary ice cream cakes, which usually consist entirely of ice cream. The dessert also has little to do with classic ice cream bombs. Ice cream bombs consist of several types of ice cream, which form a dome shape in layers. What makes Baked Alaska so special is the combination of homemade ice cream in the core, a fluffy pastry base, and a topping of delicate meringue that is briefly flambéed. That’s where the name comes from, by the way: “Baked” means “baked” in German. There are several theories about the origin of “Alaska”. In any case, the name is valid as an expression of cold and hot.

Did you know? The dessert called “Omelette Surprise” in upscale cuisine differs a bit in its preparation – for example, it is covered with sponge cake dough and served without a brownie base.

Baked Alaska: A dessert of ice and fire

Baked ice cream – is it possible? Very well indeed! This is ensured by a thick cap of meringue, which encases the ice cream. In addition, the pastry base ensures that the ice cream does not melt. Baked Alaska is not baked properly but flambéed. The dessert should be served immediately after flambéing. This way the ice cream stays nice and firm. If you like, you can garnish the dessert with fresh fruit or sprinkle it with powdered sugar. Tip: A ‘tipsy’ version of Baked Alaska is the “Bombe Alaska”, where the ice cream cake is doused with rum and served flambéed.

The preparation of Baked Alaska requires some skill and patience. But anyone who has ever tasted homemade ice cream knows: the effort is worth it! With an ice cream maker as a kitchen helper, making ice cream is no problem. The important thing is that the ingredients are fresh. The brownie batter only needs to go into the oven for about 20 minutes. And for flambéing, a gas burner is used, which caramelizes the outermost layer of the meringue to a golden yellow in seconds.

Tip: If you’re in a hurry, you can also use store-bought ice cream or ready-made sponge cake. But of course, it tastes better homemade! Depending on your taste, you can vary the types of ice cream. For example, how about our homemade fruity lemon ice cream or creamy vanilla ice cream? And as an alternative for the base, try brownies with walnuts. And now it’s time for the sweet surprise!

This website uses cookies to improve your experience while you navigate through the website. Out of these, the cookies that are categorized as necessary are stored on your browser as they are essential for the working of basic functionalities of the website. We also use third-party cookies that help us analyze and understand how you use this website. These cookies will be stored in your browser only with your consent. You also have the option to opt-out of these cookies. But opting out of some of these cookies may affect your browsing experience.
Necessary Always Enabled
Necessary cookies are absolutely essential for the website to function properly. This category only includes cookies that ensures basic functionalities and security features of the website. These cookies do not store any personal information.
Functional
Functional cookies help to perform certain functionalities like sharing the content of the website on social media platforms, collect feedbacks, and other third-party features.
Performance
Performance cookies are used to understand and analyze the key performance indexes of the website which helps in delivering a better user experience for the visitors.
Analytics
Analytical cookies are used to understand how visitors interact with the website. These cookies help provide information on metrics the number of visitors, bounce rate, traffic source, etc.
Advertisement
Advertisement cookies are used to provide visitors with relevant ads and marketing campaigns. These cookies track visitors across websites and collect information to provide customized ads.
Others
Other uncategorized cookies are those that are being analyzed and have not been classified into a category as yet.
SAVE & ACCEPT
Go to mobile version
%d bloggers like this: