Homemade Falafel with Pointed Cabbage Salad. Falafel are delicious fried balls made from chickpeas, herbs and spices. They are one of those dishes that I can eat several times a week without getting tired of it. And making homemade falafel is much easier than you might think. They’re also delicious: crispy on the outside and soft and full of flavor on the inside. Try it out!

Homemade Falafel with Pointed Cabbage Salad. Before the vegan trend really took off, for years falafel were often the only tasty snack you could find as a vegetarian or vegan in the fast-food restaurants of the city centers. Therefore I have a very special relationship with falafel. They often saved me from starvation late at night after a party.

Falafel have their origin in the Arabic cuisine

Falafel originally comes from the Arabic kitchen. However, the place and time of the origin of the dish are not known. Some historians assume that it originated in Egypt, but others suspect that it originated in Lebanon or Palestine. Nowadays, falafel belongs to all cuisines of the Near East and North Africa.

Every oriental country has its own way of making homemade falafel. And every country claims to make the best falafel. So there is no “THE” original falafel recipe, but typically spices like cumin, garlic, and fresh herbs like coriander or parsley are added to the chickpea mixture. You can easily make this mixture in a food processor. 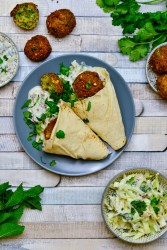 Falafel are delicious fried balls made from chickpeas, herbs and spices. They are one of those dishes that I can eat several times a week without getting tired of it.
Print Recipe Pin Recipe
Prep Time 25 mins
Cook Time 15 mins
Total Time 40 mins
Course Main Course
Cuisine Libanese, Oriental
Servings 4 persons

You can of course fill the flat breads with other ingredients. Especially red onion rings, cucumber, tomato, pepperoni or iceberg lettuce go well with falafels. If you don’t like coriander at all, you can also use parsley without any problems. If you want to use less fat for frying, you can also fill a pan with a finger’s breadth of oil and fry the falafel in it. You can also bake the falafel in the oven, but then they will be drier and not so crispy.
Keyword Cabbage, Chickpeas

Homemade falafel is made from dried chickpeas

“Real” homemade falafel is prepared with dried, soaked chickpeas. The soaking and preparation takes a long time, so I recommend you to make a larger quantity right away and freeze the pre-formed unfried falafel.

If you don’t care about authenticity or you have forgotten to soak the chickpeas, you can also use cooked chickpeas from the can.

This website uses cookies to improve your experience while you navigate through the website. Out of these, the cookies that are categorized as necessary are stored on your browser as they are essential for the working of basic functionalities of the website. We also use third-party cookies that help us analyze and understand how you use this website. These cookies will be stored in your browser only with your consent. You also have the option to opt-out of these cookies. But opting out of some of these cookies may affect your browsing experience.
Necessary Always Enabled
Necessary cookies are absolutely essential for the website to function properly. This category only includes cookies that ensures basic functionalities and security features of the website. These cookies do not store any personal information.
Functional
Functional cookies help to perform certain functionalities like sharing the content of the website on social media platforms, collect feedbacks, and other third-party features.
Performance
Performance cookies are used to understand and analyze the key performance indexes of the website which helps in delivering a better user experience for the visitors.
Analytics
Analytical cookies are used to understand how visitors interact with the website. These cookies help provide information on metrics the number of visitors, bounce rate, traffic source, etc.
Advertisement
Advertisement cookies are used to provide visitors with relevant ads and marketing campaigns. These cookies track visitors across websites and collect information to provide customized ads.
Others
Other uncategorized cookies are those that are being analyzed and have not been classified into a category as yet.
SAVE & ACCEPT
Go to mobile version
%d bloggers like this: