Ginger – it’s almost next to impossible for a soul to not have heard or had ginger in their life! It is one of the most flavoursome and nourishing spices to exist. Ginger has been used by people in medicine and culinary for centuries now.

Not only does it add an appetizing flavour to your meals but also is medicine for several illnesses. This odd-shaped spice is loaded with bioactive compounds and antioxidants that are extremely beneficial for the body as well as the brain.

It contains a very powerful substance ‘gingerol’ which is a medicine to countless health issues. The eccentric and unique fragrance of ginger comes from the oil that is naturally present in the spice – which adds aroma to your food!

Ginger provides mankind with uncountable health benefits. And that too without any side effects or harm to the body. It has been highly effective against several different types of nausea.

It is the most effective when it comes to morning sickness amongst pregnant women. It has also been observed that ginger helps reduce muscle pain and soreness. It doesn’t have the immediate impact but when consumed daily, it can be very beneficial to cure sore muscles.

Moreover, the most common use of ginger as a home remedy is against cold and flu. Fresh ginger helps in protecting the respiratory system which prevents cold and flu! Several studies have shown that this spice improves the functioning of the brain by improving reaction time and working memory. It is also a core ingredient in medicines used to cure Alzheimer’s disease.

Grown deep inside the fresh, brown soil, fresh ginger is widely popular. After being cleaned and processed, these ginger roots are brought in homes for cooking delicious meals.

People either peel them and use them directly for cooking or medicinal purposes. Or they even experiment around to create different forms of it from these fresh ginger roots.

Dried ginger is nothing different from fresh ginger. It is just the spice that has undergone a drying process, unlike any other fruit or vegetable.

After peeling the skin from the root, the ginger pieces are dried under the sunlight for about a week. This gives you dry ginger which would then be used in several different forms!

Dried ginger when crushed and processed forms ginger powder. This is the most widely used form of ginger worldwide. It is often found in slightly brown or white colour. Having an extremely strong aroma, this powder is used in cooking meals as well as when cresting medicines in the laboratory.

Several companies create ginger powder and sell it out in the market under their brand name. Ginger powder is an everyday used ingredient in many households – especially Asians!

There is nothing surprising about a ginger paste. It is simply a paste made from ginger that is one of the most significant ingredients in the Indian cuisines. Fresh, peeled ginger when blended in a chopper with a couple of drops of water – forms a thick, yellow paste. This is the ginger paste! 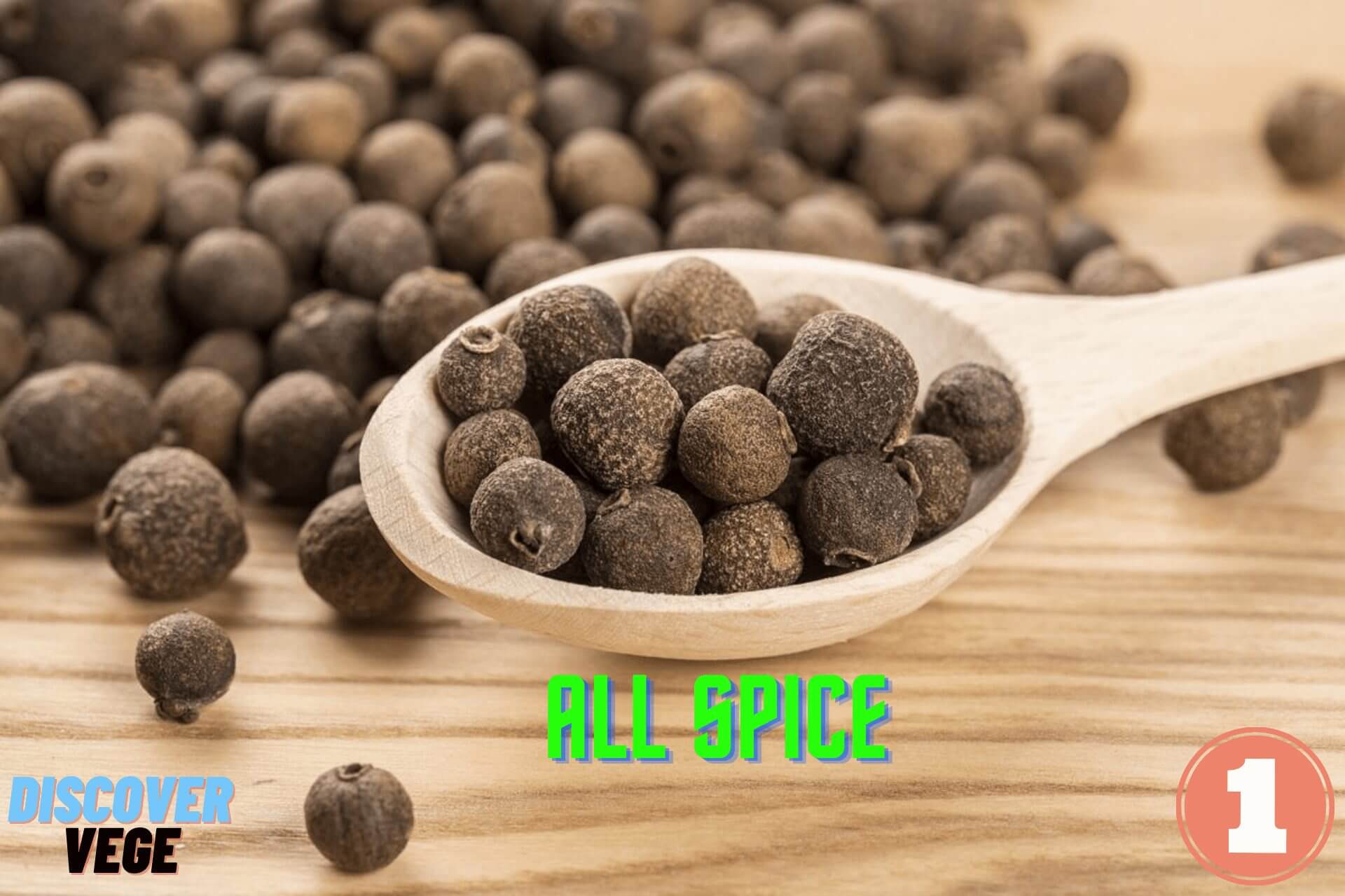 Originated in the lands of Mexico, the allspice is the ultimate ginger substitute. Produced by crushing dried berries from Pimenta Dioica, this spice is commonly known as the Jamaica pepper.

The nut tends to be a dark purple, although when crushed it forms into a brown powder! It is used in several foods, especially in the Indian and Caribbean cuisines. All spice tastes have a very spicy yet sweet flavour which indicates the complexity of this ingredient. It is often used in cooking for different delicious meals.

Allspice is a very popular and acceptable substitute for ginger in stir fry, that is usually the first step of cooking complex yet appetizing meals.

Just like ginger, allspice has also had a long history in medicine, especially around the Caribbean and Central America. It solves several health issues such as gas and bloating.

When a pinch of this spice is added in hot tea and consumed, it has proven to cure an upset stomach and relieve gas. Due to all these astounding properties, Allspice makes a perfect ginger substitute. 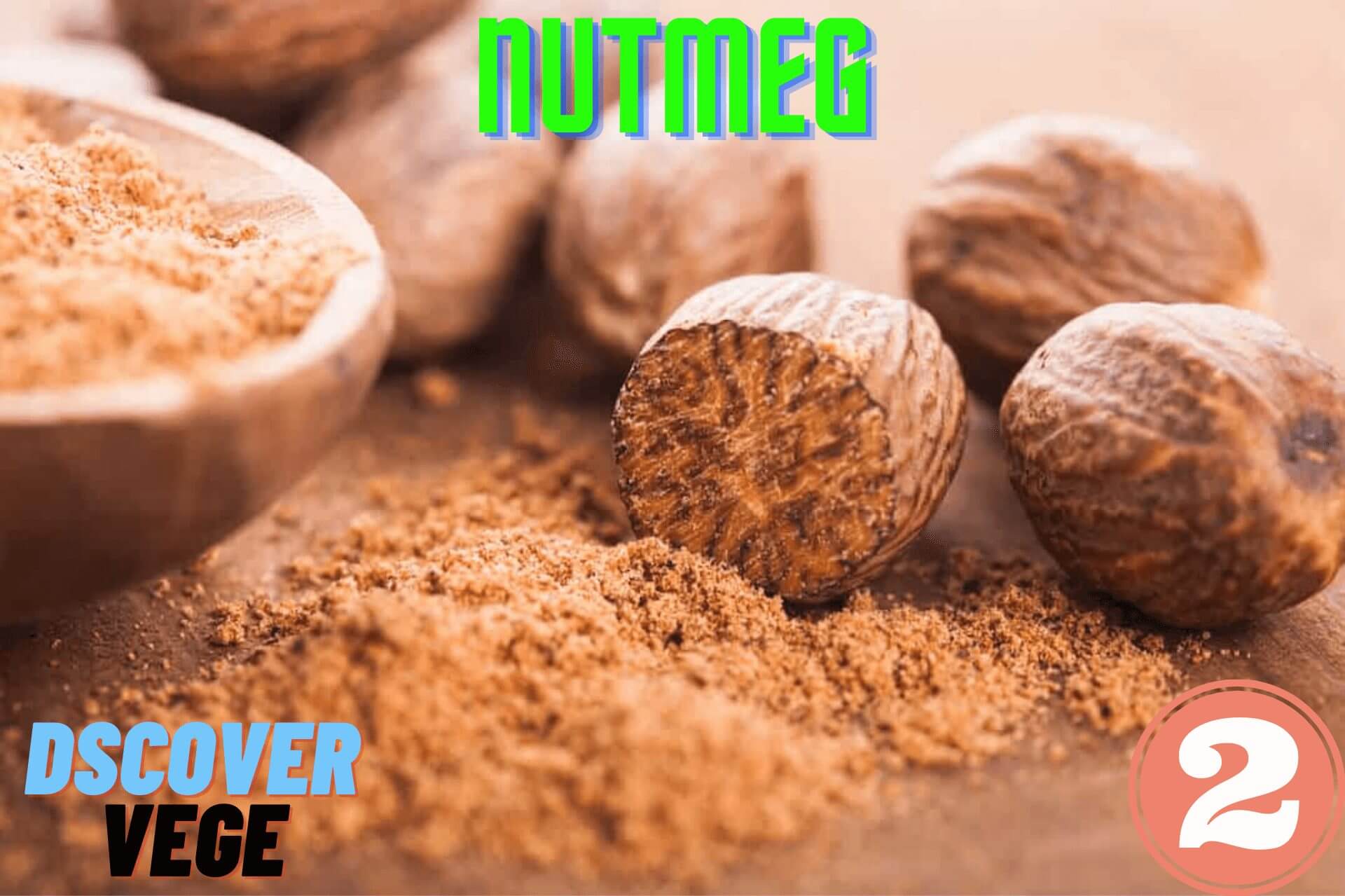 Just like Allspice and ginger, nutmeg is also a very popular kitchen ingredient. Found in the tropical green forests of Indonesia, this spice is said to be warm and has a nutty flavour.

Nutmeg is said to be a very strong spice and has a dominating aroma that would fill up the entire room. Although it does have certain health benefits it is most commonly used for its flavour and taste.

It is mostly used in baked goods such as potatoes, sausages, eggnogs and meats. The flavour of nutmeg resembles a lot with that of ginger that is why it is used as a perfect ginger substitute by several people.

Some of the very important health benefits of nutmeg include an increase in appetite and relief from nausea. It also improves digestion giving relief to the consumers. 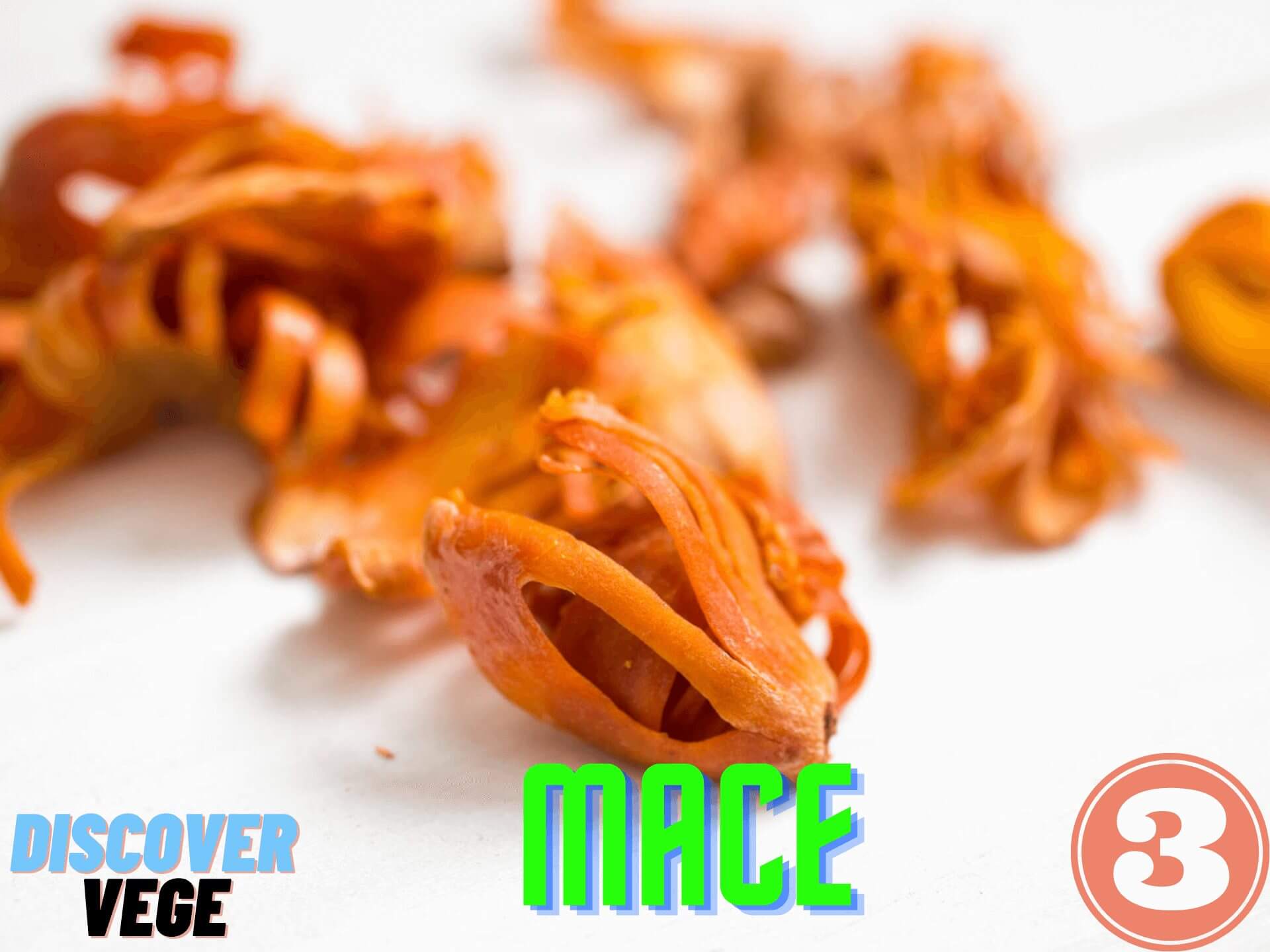 Mace – a brownish-yellow spice that is obtained from the coating of the nutmeg. Since you already know that nutmeg is a great substitute for ginger, it’s pretty obvious that the outer layer of nutmeg would also be a ginger substitute.

However, mace tends to have a more sweet and subtle taste, unlike nutmeg! It can be added in desserts too such as cookies, doughnuts and cakes. A very tiny amount of mace can have a huge impact on the taste of food.

Since it is a part of nutmeg, it’s medicinal properties are very similar to those of the same spice. It cures nausea and digestion like all other similar spices. Moreso, it has also been very effective in treating kidney and lung problems.

The most distinctive property of mace is that it helps to treat gum infections. Making the gums stronger and getting rid of bacteria. Mixed in hot water or tea, mace makes a perfect cute for numerous health issues. 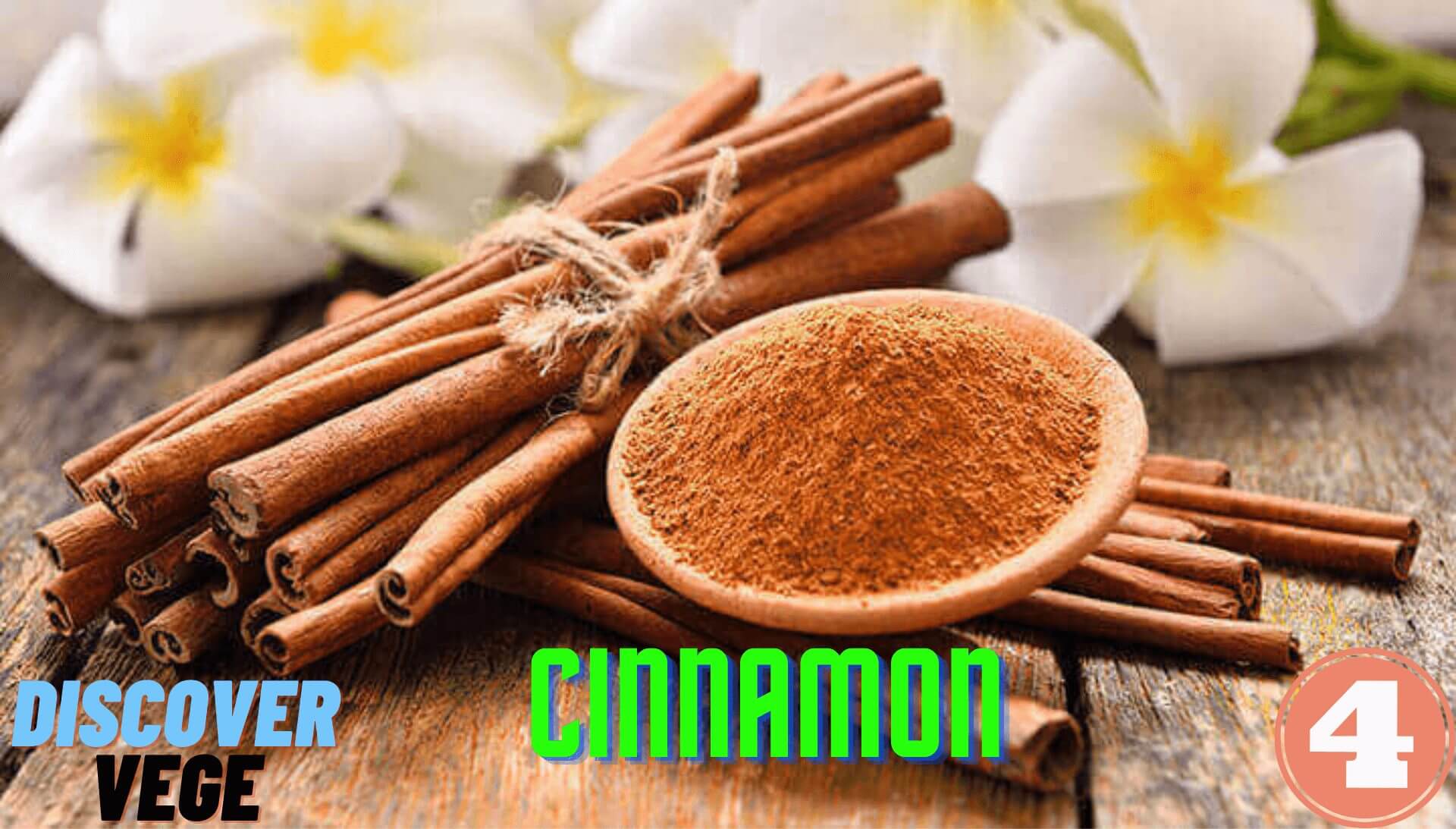 Being one of the most popular and widely used spices in the world – cinnamon, it’s taste and benefits are known to every soul. From being used in gravies to being served in coffees, lattes and cakes, you’ll find cinnamon everywhere.

This spice is very similar to ginger as it copies it’s warm and sweet flavour. It can be a delightful addition to any food item when running out of ginger.

As far as it’s medicinal properties are concerned, cinnamon has been prized for them! It is loaded with antioxidants and micro biotics, that would enrich one’s mind and body with all the goodness they need.

It has anti-inflammatory properties which help the human body fight against damaged tissues and infections. Most importantly, it plays a very vital role in keeping your heart healthy. 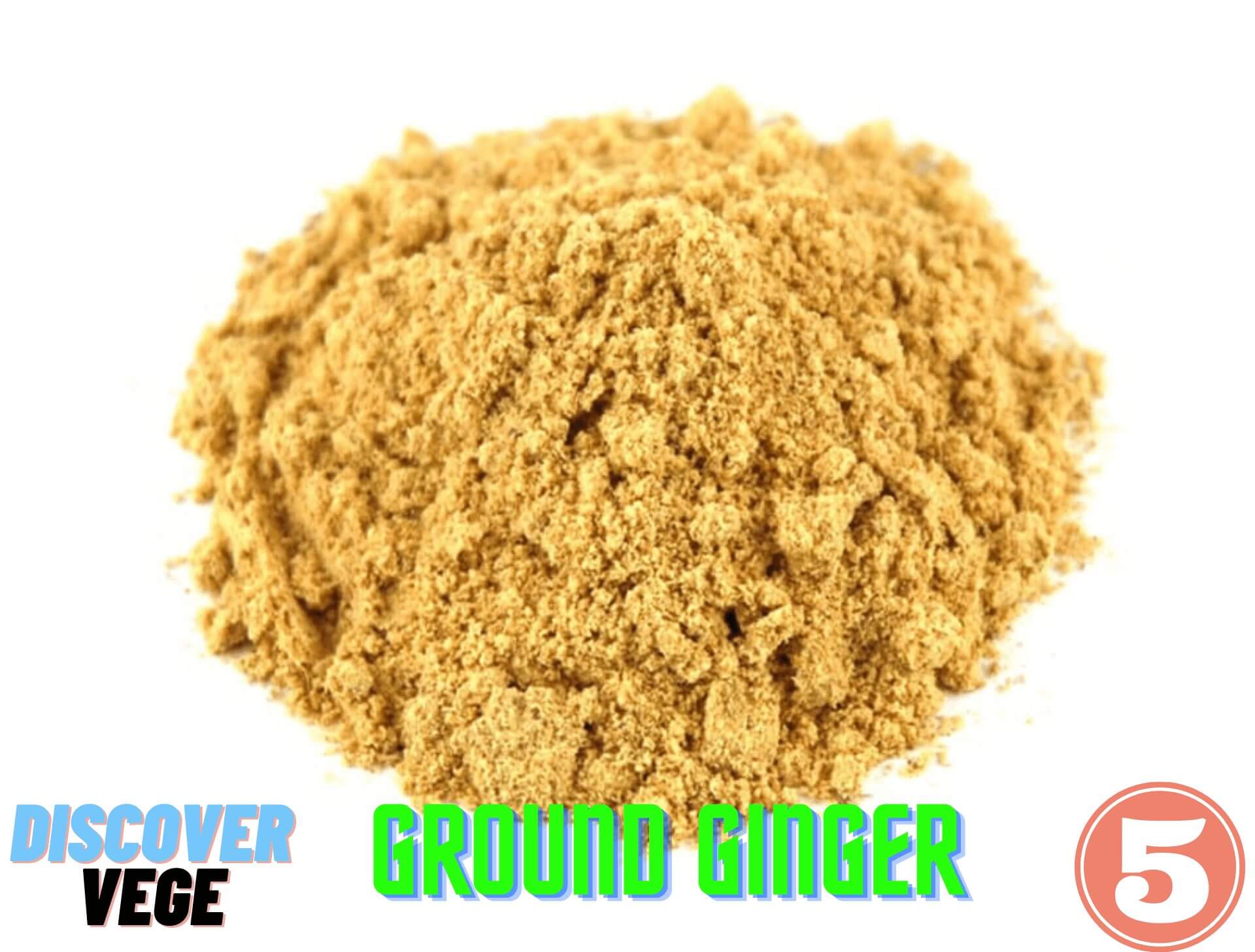 As the name suggests, the ground version of gingers is called the ground ginger. This spice is the powdered ginger that has an earthy taste which is used as a sub-ingredient in several spice mixes.

Since the ground is basically crushed ginger it is the perfect finger substitute. The taste is the same. The aroma is the same! Just the texture and consistency is different.

All those benefits that you would receive from consuming fresh ginger, the same would be attained with ground ginger. It cures several illnesses and makes the immunity system stronger. There is not a better substitute for fresh ginger than its own form – only crushed! 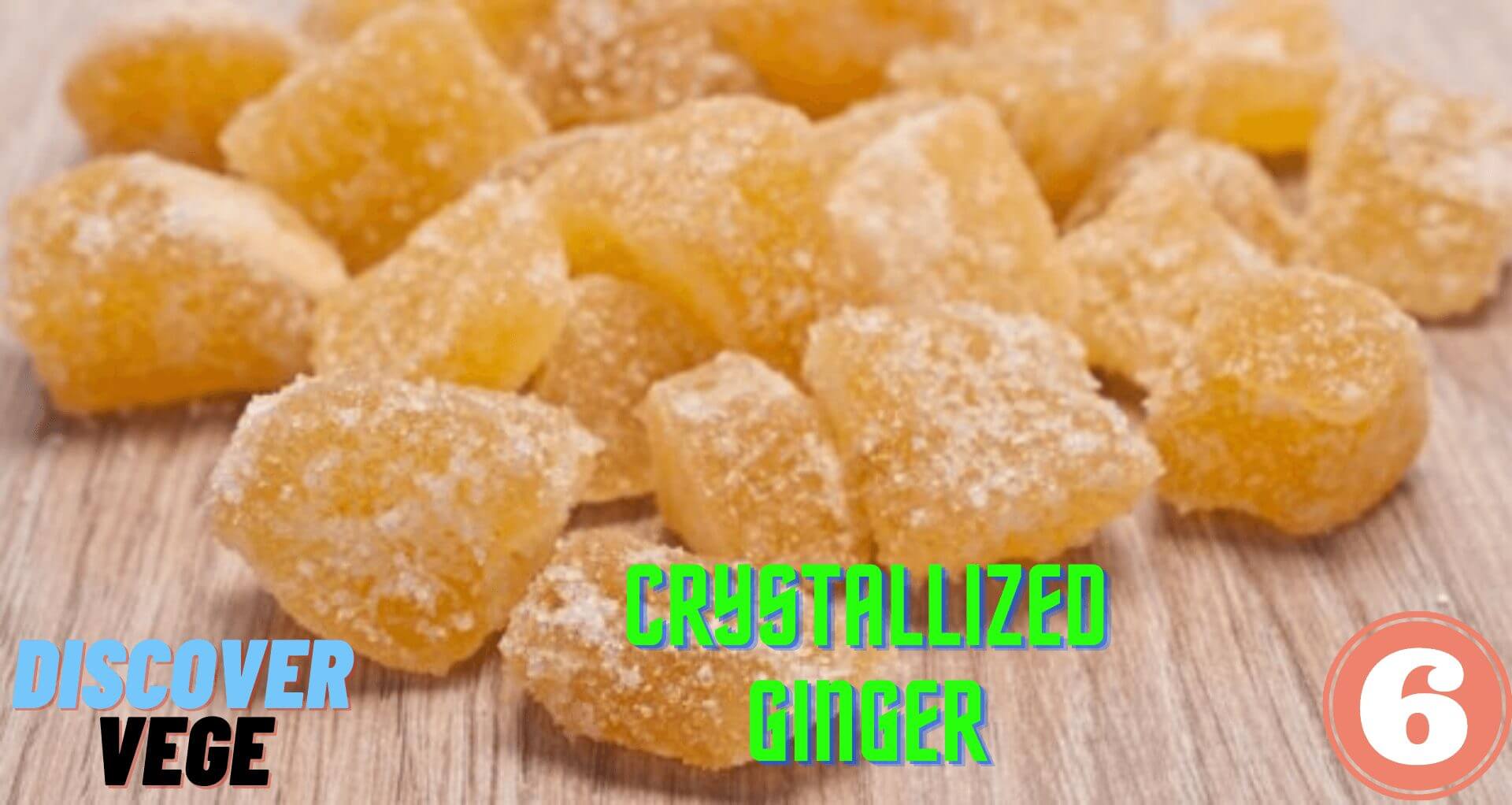 In simple words, crystallized ginger is ginger candy! When ginger roots are boiled and mixed with sugar, they form ginger candies. These candies can then be used in any meals you cook as a substitute for fresh ginger, while they can also be eaten as it is to cure illnesses.

It has all those health benefits that you would typically get from fresh ginger. Cured coughs and flu. Helping cure diarrhoea and fighting against nausea.

When these crystallized ginger candies are consumed they give a warm wave in the entire body while flourishing it with nutrients and antioxidants.

It is the fastest and effective way to cure the flu or cough! Crystallized ginger adds the unique sparkle and spicy-sweet taste to anything it’s added into. 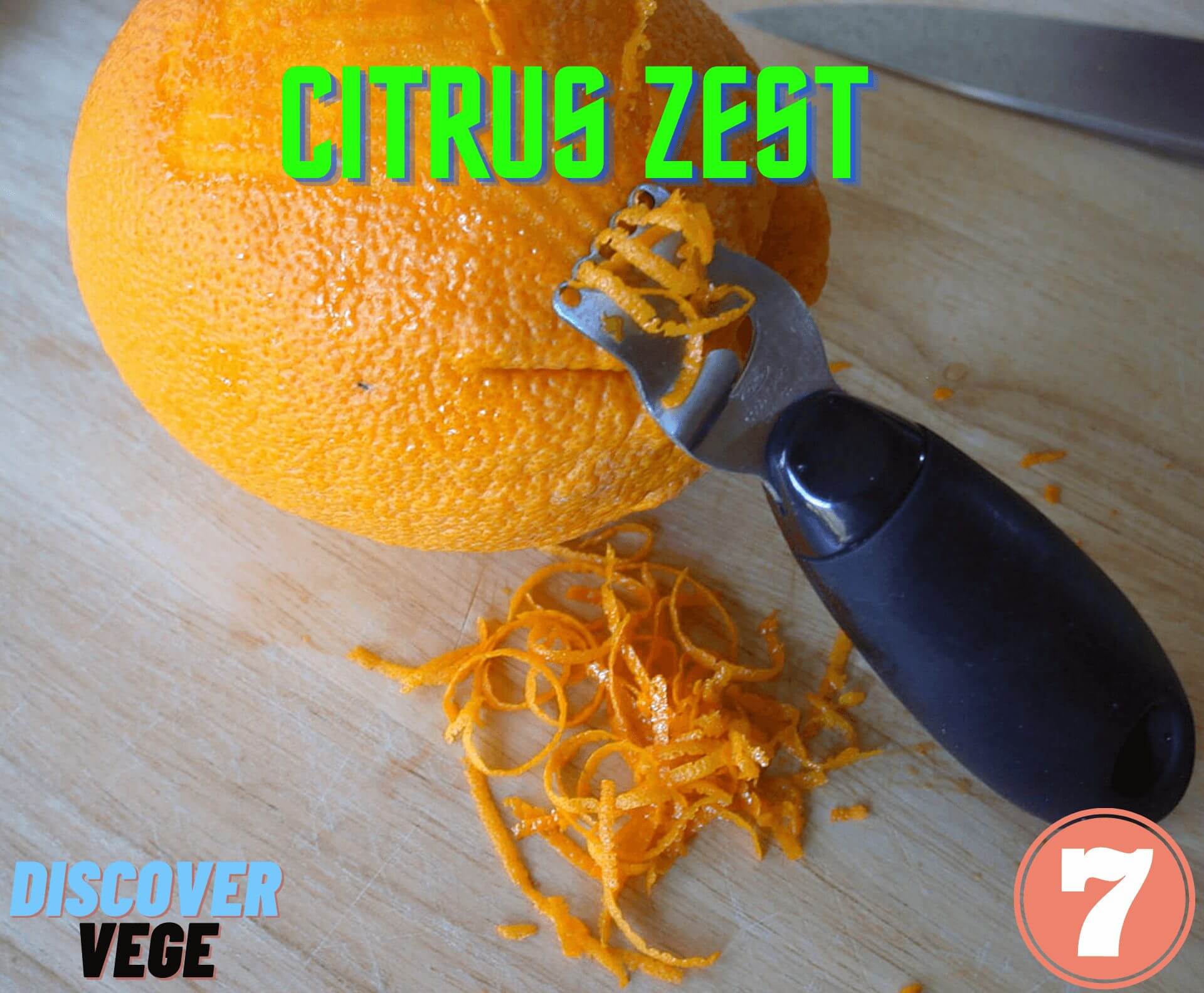 This is the peel of lemon! The outer part of lemon has become ragingly popular in the last few decades when scientists came forward with its astounding health benefits.

Citrus zest is said to be the perfect ginger paste substitute. If you ever run out of the paste just add the zest in your meals to give it a wholesome flavour. Zest tends to have a tangy and a little sour flavour along with a very captivating natural fragrance.

Citrus zest has countless nutritional benefits that involve making the immune system stronger and providing all the necessary nutrients such as calcium, vitamins and iron.

It is great for your digestive system and protects the heart. Citrus zest is also one of the best ginger substitutes.

Though everything about ginger has already been explained above. There are a few things about ginger that everyone must know, especially the housewives who have the very important responsibility of cooking delicious meals.

There is not much difference between fresh ginger vs dry ginger. Fresh ginger is simply a root that has been plucked out.

It has all the natural oils present in it and has a watery texture when chopped! Fresh ginger is often peeled and chopped to form minced ginger that is used in everyday cooking. However, dry ginger is just the ginger that has been dried and would later be crushed to form a powder.

The fresh ginger to minced ginger conversion is not very difficult. It depends on the size of the root that many spoons of minced ginger would be obtained after the chopping. Well, there is quite some significant difference between ginger powder vs fresh ginger.

Now you already know what both are, although the taste is not very different the use is. Fresh ginger is used in gravies, Chinese and lentils. While powdered ginger is used in sauces, garnished on meals and added in dry meals.

Though there are numerous fresh ginger substitutes there is nothing like the spice itself. Ginger itself is ginger! Though these substitutes might cover-up for some time if you want to bring out the real taste in food and to have faster cures than you must use ginger itself. And use it as per the instructions given by the professionals – whether be a chef or a therapeutic!